Victorian engineer John Penn Junior, or one of the many hundreds of men he employed at his Greenwich marine engine works in the 19th century, could probably have rebuilt it in a matter of days, if not hours.
But the once splendid brick and stone wall fronting the John Penn & Widow Smith Almshouses on Greenwich South Street still lies partly in ruins more than seven months after a large section was knocked flat in a motor vehicle accident.

The charming almshouses and their front wall were built in 1884 for Ellen Penn in memory of her husband John Jnr, who died in 1878. The almshouses were expanded from 8 properties to 10 after the separate Widow Smith charity was merged with John Penn following the destruction of its almshouses on Trafalgar Road in the Second World War.

Listed Grade II by English Heritage in 1973, the Greenwich South Street almshouses are a development of 10 self-contained properties with access to shared gardens, a residents’ lounge and guest facilities, according to managers Hanover Housing Association.

On Hanover’s website, prospective residents are assured they ‘won’t have to worry about maintenance of the buildings/grounds, as this is taken care of by the housing manager’.

Well, for over seven months, they’ve left the partly demolished front garden wall much as it was when the vehicle crashed into it. Indeed, if you stand at the bus stop outside the Penn’s almshouses, you can still see part of the crashed vehicle’s front body panel embedded in the broken brickwork.

Steff Turton, Hanover Housing’s manager at the Penn’s almshouses, explained in response to an inquiry from the ATA about the delay in effecting repairs: ‘We are aware of the issue and we have been taking steps to ensure that it is resolved. We have lodged a claim with our insurance company and have been dealing with them over the past few months to try to bring the matter to a successful conclusion.

‘As they are organising the work, there is little that we can do but continue to pursue them for updates. My understanding is that the plans for the restoration are currently being scrutinised by the local council. We are as keen as you are to ensure that the original brick and stonework is used in the restoration and we have made this clear to our insurance company. As the building is listed, the council will also be involved in ensuring that the work is carried out sympathetically and in keeping with the almshouses and the surrounding area.’

Steff Turton added: ‘I completely agree with you that the wall is an eyesore and please pass on my apologies to any local residents that mention it to you. I will pass on your e-mail to our insurance company so that they are aware that local residents are also keen to see the work completed.’

The John Penn engine works once occupied an approximately seven-acre site on the corner of Lewisham Road and Blackheath Road, a location which would have put it on the boundary of the Ashburnham Triangle, had the works survived into the late 20th century. Sadly, the last surviving building, the pattern shop built around 1863, was demolished when the site was cleared in the mid 1990s to make way for a car park and the Wickes DIY and PetSmart (now Pets at home) stores.

Local historian Diana Rimel has included information on the John Penn & Widow Smith almshouses in her booklet on the Triangle (The Ashburnham Triangle, still available through the ATA website). And former Triangle resident Richard Cheffins wrote about John Penn & Sons in an article for the Greenwich Industrial History Society. He said the main entrance to the Penn engine site, where engines for Brunel’s Great Britain and Great Eastern were made, was in Cold Bath Lane, now appropriately named John Penn Street. 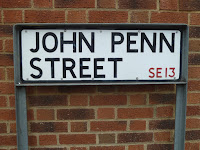 Ex-ATA chairman Mick Delap is currently working on a project to digitise Richard Cheffins’s extensive archive of the Triangle’s fascinating history, both commercial and residential, with help from ATA supporter and Triangle resident Tom Webb. They are also putting into digital form the data from Diana Rimel’s Triangle booklet. For more details of this project look out for the ATA’s summer newsletter which should be dropping through your letter box later this month.