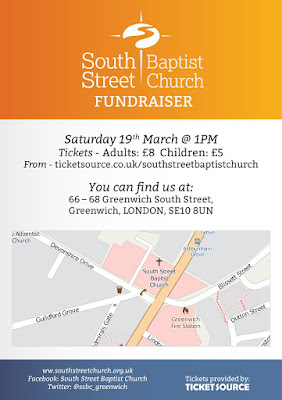 All proceeds from tickets, activities, raffle and refreshments will go towards the South Street building project which will provide disabled access to the church.

Tickets: adults £8, children £5, are available to purchase here or from ticketsource.co.uk/southstreetbaptistchurch
No comments:

A new community cinema is starting up near Deptford Bridge.
Deptford Cinema is fuelling our nightmares by running Full Moon Film Night on the last Friday of every month - so mark your calendars with blood or something similarly permanent.


This month they are showing the 2015 arthouse horror It Follows!


"For 19-year-­old Jay (Maika Monroe), the fall should be about school, boys and weekends at the lake. Yet after a seemingly innocent sexual encounter she suddenly finds herself plagued by nightmarish visions; she can't shake the sensation that someone, or something, is following her...

"Premiering at Cannes Critics' Week this low budget indie second film from writer/director David Robert Mitchell (The Myth of the American Sleepover) became a surprise hit, snowballing its initial straight-to-streaming release to a widespread cinema run. Stylishly shot, with a slow building creep, and a synth-tastic soundtrack inspired by the most memorable 80s horror scores, we dare you to judge for yourself what many are calling the scariest film in years."

The Ministry of Justice has confirmed that it will close 64 courts within the next two years including Greenwich Magistrate Court on Blackheath Road.
The Court was built in 1909 and is a Grade II listed building situated in a reasonably large site in the Ashburnham Conservation area. It will be interesting to see what happens to this site. The Grade II listing will restrict major redevelopment of the building.
No comments:

Many properties in the Ashburnham Conservation Area are subject to additional planning control as a result of an Article 4 Direction being placed. These controls are in addition to Conservation Area controls. The current Article 4 Direction was introduced May 2014 and removed permitted development rights so that planning permission is required for certain works which would otherwise not require permission.  The council has now drafted a new guidance note to the Direction, which identifies the properties covered by the Article 4 Direction and sets out the specific planning controls under the Direction. The document also explains the types of works that will be likely or unlikely to gain planning permission.  The Council is seeking comments on this new guide.  The consultation ends on Monday 14 March 2016. Copies of the draft guide can be found on the Council's website via the link below. The Planning Hub will be responding to the guide on behalf of the ATA. The key changes noted by the Planning Hub compared to the previous 1995 Guide are as follows:

1. Solar panels - the Guide states :  "In the case of unlisted buildings in conservation areas, conventional solar panels may be acceptable, but only on roof sloops that are not visible from the public realm."   The old Guide was silent on solar panels.

3. Historic shop fronts  and porches - the new Guide now includes some guidance on these special features. 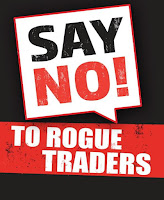 Royal Greenwich Trading Standards are warning residents to take care when approached at home by males trying to sell knives, pots and pans on their doorstep. The males are thought to be travellers / Irish
This activity has been seen to link with burglaries at properties at a later date.
This information has been circulated by Greenwich Police.
If you or your neighbours have anyone knocking door to door in your street trying to sell knives and pans, please contact Royal Greenwich Trading Standards Neighbourhood Response Team as soon as it happens on 020 8921 8223 or email tradingstandards@royalgreenwich.gov.uk

Remember to SAY NO to Rogue Traders 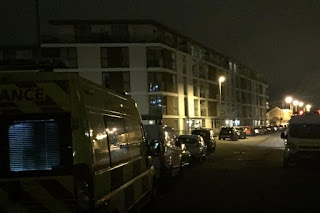 Reported in Tuesday's Evening Standard:
'Police were sent to a four-star boutique hotel yesterday after a man claimed someone was in his room armed with a gun and knife. Officers arrived at the Mercure Hotel’s reception area in Catherine Grove, Greenwich, after receiving the call. Police tweeted that a man suffering a “mental health crisis” in the lobby was carrying a knife and had to be disarmed by officers.'
Sharp-eyed locals will note that the picture used by the paper isn't of the Mercure. The same picture was used in News Shopper, who also decided that the Mercure is in Deptford rather than Greenwich.
No comments:

Fortunately no major issues for the Ashburnham Triangle were identified during this period, however there has been an increase in thefts from motor vehicles from December – January including damage to cars in Devonshire Drive and Egerton Drive on Boxing Day.  Two residential burglaries were reported in Langdale Road and Ashburnham Grove; still this is very much a decrease on the last available figures and a couple of arrests have also been made of known criminals operating in the area.

The police continue to follow up burglaries by cocooning, a process which involves visiting properties near to where the offence has been committed,  giving reassurance and advice on crime prevention as well as gaining evidence, where possible, to locate those responsible.

In view of the recent spike in house burglaries where sash windows have been forced open to gain entry to houses, the Security Hub Representatives are working on a new crime prevention leaflet which will be distributed to residents at some time in the Spring as well as being posted online.

The leaflet will give residents who do not own/use a PC or are not signed up for news alerts, the opportunity to act on security information relevant to the Ashburnham Triangle and some general tips along with details of who to contact in the case of criminal or fraudulent activity.

You can click here to read the minutes from the 25th November 2015 Greenwich West Safer Neighbourhood Ward Panel meeting.
No comments:

You may have noticed that we've had a few issues with the ATA website in recent months. As a result we have decided to rebuild the website from scratch and, hopefully, it's now back for good.
The new site doesn't have all of the content of the old site just yet as we've endeavoured to get the show back on the road as soon as possible, but most of the posts from the last twelve months have been restored and more will follow.
There are a few new features you may wish to look at:


If you subscribed to receive email updates from the old site these will automatically continue with the new.
The new site will evolve over the coming months and we may have a few teething problems - if you see anything that looks wrong, please let us know, again via the Contact Us panel.
No comments:

The ATA has been made aware of an application for an alcohol and entertainment licence at the above premises. If anyone has any concerns and wants to raise an objection that they can do so up to the February 18th by emailing licensing@royalgreenwich.gov.uk and raising objections based on the following;
- protection of children from harm,
- public safety,
- prevention of public nuisance,
- prevention of crime and disorder
If any one needs any further information on the application please contact Simon Barrs.
No comments:

Six Nations at the Ashburnham Arms

The Ashburnham Arms is showing the Six Nations rugby on its two large screens through February and March. The matches are: