How to Beat Car and Bike Crime

The good news is that domestic burglary figures continue to decline within the Triangle. The bad news, however, is that motor vehicle crime, mainly involving theft from motor vehicles; motorbike and bicycle theft is on the increase.

It may be difficult to protect your car from a determined, professional thief, but in most cases car crime is committed by opportunists who often take less than a minute to get into a vehicle.  Thieves like items that are concealable, removable, accessible and valuable.

The top 5 most common items stolen from vehicles are

Have a look at the Frequently Asked Questions from the Metropolitan Police web site and see how you can protect your vehicle.

Bike, moped and motorcycle theft also continue to rise. Greenwich Police recommend owners to use locks such as ‘Gold Sold Secure’ and a high quality D-lock to prevent theft.

Lock-up tips
Out and about

If your bike does get stolen, security markings will help the police to get it back to you.  Bikes can be security marked and registered at bikeregister.com.

If three blokes come to your door in hi-viz jackets, like they did to us the other day, saying they’re doing a survey for moneysupermarket.com, it’s not the moment for bonhomie and inclusiveness and for asking them in for a cup of tea and a squint at your energy bills. When a fourth materialised at the back in a suit and tie, I did ask if they usually travelled in packs, but the answer seemed reasonable - two were trainees and one was the area manager. Luckily my daughter was there, with better fraud-antennae than I have, not so given to mindless optimism. She saw them off, and was proved right by a call to moneysupermarket.com, who said they never send people door to door. The police came round and opined that the hi-viz mob were probably less interested in identity fraud than in physically snaffling a few valuables after they’d distracted you. Apart from expected advice about examining ID and not letting people in, the police suggested taking a picture of them. I love it: ‘Could you move together a bit more. Your manager needs to be in it too - we want to see everybody. No, look up. Look this way. Smile!’
1 comment:

We are holding a drop-in for local residents to discuss any policing related matters or issues of concern with our dedicated PCSO (Police Community Support Officer), Henry Lawton, of the Greenwich West Safer Neighbourhoods Police Team.
With the imminent closure of Greenwich Police Station, these events take on an even greater significance and give you the opportunity to meet our SNT team as well as to enjoy an afternoon drink on a summer's day and the hospitality of the Ashburnham Arms pub.

This event is open to anyone who lives in or near to the Ashburnham Triangle. Just turn up at any time on Saturday between 2 pm – 3 pm. We look forward to seeing you on the day.

It is with much regret to inform you of the permanent closure of Greenwich Police Station in Royal Hill / Burney Street. The Doors will be finally closed at the end of this month.

Our Safer Neighbourhoods Team will still be vigilant within the area and will share the Royal Parks Police office within Greenwich Park located near Charlton Way (Shooters Hill) Main Gates. You will also be able to visit them with any queries or concerns at Greenwich Market on either Wednesday or Thursday between 7pm and 8pm or on Saturday afternoons between 2pm and 3pm situated near the Greenwich Market Managers office.  Nearby Police Stations that are still open 24 hours a day are Lewisham and Plumstead.
No comments: 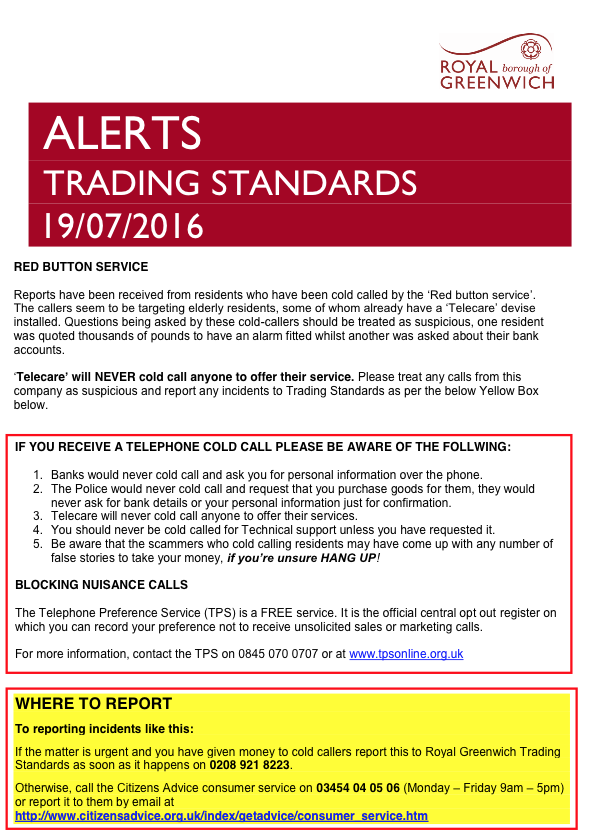 Want to write something for the newsletter?

If anyone would like to contribute to the ATA newsletter this summer, you would be very welcome. If you have thoughts about anything local that you’d like to share, let us know. It doesn’t have to be something dramatic – like when a bus nearly dropped down a hole on Blackheath Hill. It could be quiet and domestic. Have you been hitched up to the new water meter system without being told? Have you found the new cyclists’ Quietway, labelled Q2 on the road? Any sparrows in your garden? It need only be a few sentences - and a picture would be good. Questions are also welcomed, and feedback about the ATA.

It might not be possible to include everything: inclusion is at the discretion of the editor, Andrew Steeds. Please send copy to him by 25th July, which is this Monday coming, at
andrew@simplyput.co.uk

The newsletter comes out every summer and is delivered to all reachable doors. It aims to let people know what the ATA has been doing and about some other things happening in the Triangle. Up until now it has had four A4 pages. This year we are thinking of having more pages and more pictures. Any thoughts on that? 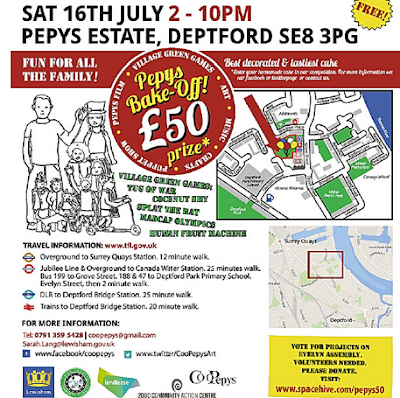 Illustrated talks on the Lenox and Sayes Court Garden projects were enjoyed on Wednesday night at the Ashburnham Arms by about 45 people. Here below are some links for anyone who'd like to know more about The Lenox.

For information about donating to the project or buying our merchandise please visit this page
http://www.buildthelenox.org/contact/

For information about buying the book please visit
http://www.buildthelenox.org/read-all-about-the-lenox-at-a-special-price/

Thai pop-up restaurant back at the Ashburnham Arms every Friday 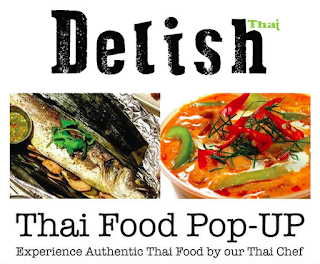 There’s a Thai pop-up  at the Ash this Friday from 6pm until 10pm.

Details and menu at www.delishthai.com. (Payment by cash only.)
No comments:

Pizzas at the Ash this Wednesday from 6pm

The Ash are serving pizzas on Wednesday 13th July as well as Thursday 14th this coming week, starting at the usual time of 6pm.

So if you're going to the talks on Wednesday in the back garden of the Ash (or if you're not), you needn't go hungry.

Julian Kingston will talk about the historic ship planned for Deptford at 8pm for about 20 minutes, followed by Q & A.

After that Roo Angell will talk about the historic garden planned for Deptford, also for about 20 minutes, followed by Q & A.


Q: How many trees will it take to build the Lenox?
A: Far fewer than will be cut down for HS2.

Q: How much of John Evelyn's original garden will be recreated?
A: Don't know. It may still be in dispute. Ask Roo.

There will be a summer drop-in for residents to raise any policing related matters or concerns with our dedicated PCSO (Police Community Support Officer) Henry Lawton. Henry is also available to give free valuable home safety, crime prevention and neighbourhood watch advice.

If you have any concerns about:
or if you would like to discuss any other issues just turn up on Saturday 30th July at any time between 2pm and 3pm at the Ashburnham Retreat (Play Street), outside the Ashburnham Arms Pub

This drop-in is also open to anyone who lives at this end of West Greenwich ward as well as residents in the Ashburnham Triangle area.


You’ve seen the Lenox posters up, but they’ve puzzled some people, so here’s some explanation.

Convoys Wharf is a 40-acre development site, near the Dog & Bell pub in Deptford, on land where Henry VIII’s dockyard used to be. The developers, Hutchison Whampoa, have got planning permission to build about 3,500 new homes, including 38- and 48-storey buildings.

A group of local ship enthusiasts have also got permission to build, in among the high-rise waterfront flats, a full-size (52 metres) sea-going Charles II warship, a replica of The Lenox which was built there at the king’s yard in 1677. They are backed by Dan Snow and Joan Ruddock, and led by Julian Kingston, who lives on a boat in Deptford Creek.

Another group, led by Roo Angel, has plans to recreate Sayes Court Garden in the same Convoys Wharf development. At the moment only a very small part of the garden exists as a park. First planted in the 1650s by diarist John Evelyn, the garden was later trashed by tenants like Peter the Great with his penchant for high jinks in wheelbarrows. Much later it was crucial to the creation of the National Trust.

The plan for The Lenox is to give the ship a permanent home on the site, when it isn’t sailing, and to provide a marine crafts visitor centre, and both a wet and a dry dock, so that other historic ships can be repaired there. Not much is left above ground of the ancient dockyard except the Master Shipwright’s House and a large warehouse. But below ground structures remain - a large basin, mastponds, slipways and a large double dry-dock.

There are still issues to settle in all these plans, and Julian Kingston and Roo Angell are coming to the Ash on Wednesday 13th July at 8pm, to tell us where things stand at present.

The talks will take place either in the Ash back room or under tent cover in the Ash back garden according to numbers. So, to predict numbers, it would help us a lot if you’d book a free place in advance: imogenerussell1@gmail.com
No comments: 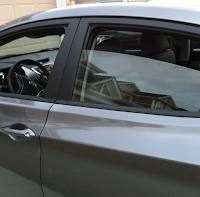 Theft from vehicles
Our Metropolitan Police Safer Neighbourhood Team have recently informed us that there has been a recent increase in theft from motor vehicles. Please ensure you always lock and close all windows on your vehicle. A numerous amount of cars within the Triangle have been leaving either the driver or passenger window open making theft from vehicles extremely easy. It is imperative not to leave anything of value on show. Any recharging cables, Sat Navs or even Sat Nav holders should all be removed from the vehicle as this is a hint to a would be thief that there is something of value inside the car. If possible, do not even leave anything inside the glove department. Leave the glove compartment open so it shows any would be thief that there is nothing left in the vehicle.

Also, earlier this week, the Charter Buildings situated within Catherine Grove was targeted by two people on a motorcycle who deliberately forced the car park gates open.  Until the gates are fixed can you please be extra vigilant and ensure you report any suspicious behaviour.
No comments: