Great news - the Ash Sunday lunch is back! As with all restaurants during the current situation please be sure to book a table in advance (020 8355 5141). 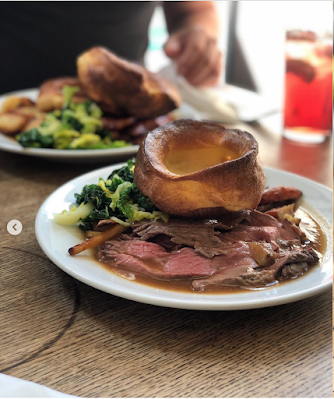 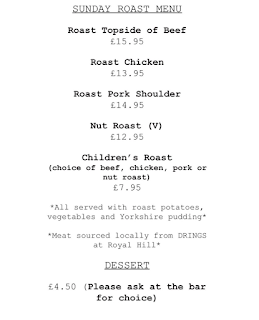 Midsummer at the Thames Tideway Tunnel Greenwich Pumping Station.
Down on the Thames Tideway Tunnel site off Norman Road, there has been great excitement as the Greenwich section of the Super Sewer project took a major step forward over the past few days. The aim is to drill a sewage overflow tunnel that will prevent the Greenwich Pumping Station having to release large amounts of raw sewage into the Thames whenever excessive rain floods the existing sewers. The overflow tunnel will connect the Greenwich Pumping Station with the massive new Thames Tideway super sewer via a new pumping station just below Tower Bridge. And in the early hours of Wednesday 15th July, the largest piece of the tunnel boring machine, the cutting head, was brought in by road, and prepared for lowering down to the bottom of the 50 metre access shaft TTT have been building here for the past two years. 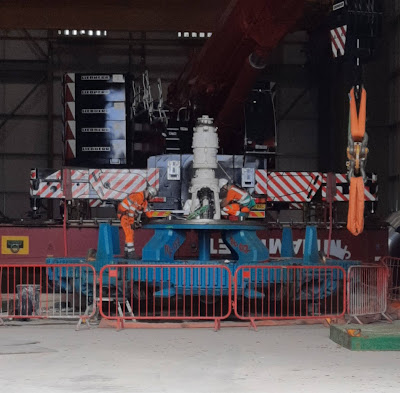 As you will see from the picture, the blue drill head is enormous. When it is in place at the bottom of our access shaft, and tipped on its side, it will start to drill its way to Tower Bridge (starting in autumn, or possibly not until the New Year). That means now is the moment for residents and neighbours of Deptford Creek to join Mick Delap in setting out the kind of Greenwich Pumping Station we want TTT to leave us, once the overflow tunnel is completed. The original planning consent with the Royal Borough of Greenwich, RBG, requires TTT to leave a legacy of public realm improvements behind them on the Greenwich Pumping Station site. But the planning agreement is very unclear about what this should mean. RBG have a longstanding commitment to creating a public access pathway along the length of Deptford Creek, both to improve public amenity, and also to showcase the Creek's remarkable 19th century industrial history. The Greenwich Pumping Station, with its Creekside access and its listed 19th century structures, is central to this plan. But so far neither TTT nor the Greenwich planners have consulted with local stakeholders, nor revealed their thinking about the future. TTT will soon need to present their post-tunnelling legacy plans to the Greenwich planners for approval. Opening up the Pumping Station to public access will be complicated. It will require imagination, and great determination, and won't happen without a three way partnership between TTT, RBG, and local stakeholders. This is an opportunity that will only come once. Please tell Mick Delap your views, and support him in the increasingly urgent campaign to save the Creek for the neighbourhood.
No comments:
Email ThisBlogThis!Share to TwitterShare to FacebookShare to Pinterest
Labels: Local News, Planning

Our Environment and Gardening Hub are looking forward to seeing some of you at 2pm on Saturday, July 18th for gardening. We will meet at Lamley House, the corner of Ashburnham Place and Egerton Drive. There is also grass to be raked on Langdale Rd near to the High Road.
If you can please bring a rake (or two) and a green bin. Do bring some water to drink as it's going to be hot, this may limit how much we can do. Anyway it will be good to get together  at a distance.
No comments:
Email ThisBlogThis!Share to TwitterShare to FacebookShare to Pinterest
Labels: Environment & Gardening, Gardening

Last week the Safer Neighbourhoods Panel met via telephone conference to discuss Greenwich West. Here is a summary of that call:

As reported on the last update, there have been numerous reports of drug dealing and using within some of the blocks of flats in Devonshire Drive, notably Plymouth House. Police have identified a possible suspect and patrols in this area have increased.

CID are still investigating the incident which occurred on 19th June along Devonshire Drive where a male was taken in his own car against his will - see post dated 21 June.  A full report will be available once CID have completed their investigation.

There have been various reports of two different fraudsters going door to door within the Triangle. Please can you warn any vulnerable neighbours who may not see this report to not open the door and engage with unknown individuals and NEVER hand over money to unknown individuals. Both fraudsters prey on the elderly and women.

Description of individuals:
Male, mid-20s, very slim build, white, between 5'7 and 5'9, sandy coloured hair with a London accent and goes by the name of “Johnny”. He concocts various stories and is well known to the police and has actually been previously arrested. I am currently awaiting an update of the whereabouts of this indivdual but please do not engage if you see him.

Male perhaps mid-30s, tall, black with a strong South London accent. Reports received that he was pretending to be a nearby neighbour and needed money for the electric meter.  Again, please do not engage or open your door to him.

A local resident witnessed the theft of a catalytic converter from a parked car in Ashburnham Grove on 3 July. The crime happened extremely quickly but was reported to the police. Other vehicle crime within the Triangle, especially theft from motor vehicles has unfortunately continued to rise especially along Greenwich South Street. Reports of thefts of bicycles from outbuildings has also increased. Please ensure bikes are secured with bike locks even in your own shed/garage.

With lockdown restrictions eased we saw many pubs re-open on Saturday 4th July which unfortunately led to bad behaviour within the Triangle - see post dated 7 July.  As previously reported it is believed patrons who had exited from the North Pole were responsible for the anti-social behaviour and erratic driving along Ashurnham Place at 1.30am on Sunday 5th July.

Last weekend also saw an increase of traffic driving past the bar in Greenwich High Road and once again there have been reports of noise and disturbance. As previously requested, I am looking for residents help to deal with any anti-social behaviour.

If you witness any issues of crime, disorder or anti-social behaviour call 999 for an emergency, i.e., if the issue is currently in progress, otherwise contact 101 and report what you have seen.

For issues with noise, please contact the Council’s noise team and ask for the noise to be witnessed – 020 8921 8921. Please also take photo’s or video clips — if safe to do so — as this type of evidence is paramount when trying to prove a case and forward any complaint together with evidence to Cllr Maureen O’Mara Maureen.O'Mara@royalgreenwich.gov.uk.

Just receiving complaints about noise or disturbances will not result in any effective solution, so if safe, please do take photographic or video evidence. But above all, please report everything.

Police advise there are pockets of car crime within West Greenwich which has significantly increased around Hyde Vale, Point Hill and as already mentioned Greenwich South Street.

There have been 26 reported burglaries within Greenwich West. The burglaries are very sporadic with no specific pattern so are seen as opportunist burglaries with most reports being theft from outbuildings.

Lots of gatherings were reported on Point Hill during lockdown and also numerous reports of drug taking and using.

Begging within the Town Centre has increased and complaints that beggars are not adhearing to social distancing with the rest of the general public. Particular problem areas are outside NatWest and McDonalds. Police continue to move on these individuals on a regular basis.

Greenwich Market have their own security as reports of shop lifting in the vicinity has once again started to rise.

Greenwich Park has been considerably busy during the lockdown and continues to be so with the warmer weather. Large notices in all public green spaces are having to be displayed to encourage park users to not litter.

Bad behaviour within the Triangle

With lockdown restrictions eased last weekend we unfortunately had to witness some bad behaviour within the Triangle from non residents visiting the North Pole bar along Greenwich High Road and D’Luxx in Blackheath Road. Complaints were received of large groups inhaling nitrous oxide gas and also arguments which led to a fight. Cars were also driven at speed up and down Ashburnham Place at approx 1.30am on Sunday 5th July. Local residents also witnessed loud music and social distancing generally not being adhered to at the North Pole and D’Luxx bars.
In order to deal with bad behaviour I am looking for residents help.
If you witness any issues of crime, disorder or anti-social behaviour call 999 for an emergency, i.e., if the issue is currently in progress, otherwise contact 101 and report what you have seen.
For issues with noise, please contact the Council’s noise team and ask for the noise to be witnessed – 020 8921 8921. Please also take photo’s or video clips — if safe to do so — as this type of evidence is paramount when trying to prove a case.
Cllr Maureen O’Mara is personally going to oversee any complaints with these establishments and has also asked for any evidence to be forwarded to her at: Maureen.O'Mara@royalgreenwich.gov.uk
We really do need your help on this. Just receiving complaints about noise or disturbances days after the event will not result in any effective solution, so if safe, please do take photographic or video evidence. But above all, please report everything.
With thanks in advance for your help.

Gardening again in the Triangle

The ATA Green Hub is going to go back to its monthly gardening sessions. The next one is on Saturday 18 July at 2pm. They will meet outside Barnstable House on the corner of Egerton and Devonshire Drives. Please bring a rake/s if you can and if you have an empty green bin it would be useful.
It's easy to keep a distance from people when gardening and it's a sociable way to get exercise. New volunteers always welcome.
No comments:
Email ThisBlogThis!Share to TwitterShare to FacebookShare to Pinterest
Newer Posts Older Posts Home
Subscribe to: Posts (Atom)