On Friday 19th June at approx 11pm there was an incident on Devonshire Drive outside Barnstable House.
A 70 year old man was taken in his own car and driven against his will. Three males were demanding money from him and managed to obtain £100. The victim sustained cigarette burns to his arms and other bruises. He managed to escape and a passing motorist called the police.
CID Lewisham are dealing with this crime and our Safer Neighbourhood Team are also assisting with enquiries.
If you were in the area and saw anything unusual please contact our Safer Neighbourhood Team.
Tina Pugh
ATA Security / Police Liaison
Email: ata.secureteam@gmail.com

Parking in the Triangle

Don't forget that parking enforcement will restart from Monday 15th June, so you or any visitors will be liable to pay a penalty charge notice if parked illegally.
The Council will continue to recognise the London Health Emergency Badge (HEB) temporary permits issued by the NHS to their healthcare and other key workers while that system is in place. Any other temporary permits issued during lockdown are being withdrawn.
Parking enforcement officers will continue to advise motorists as to where they can park. It is not acceptable to abuse council staff and any reports of this kind will be taken very seriously. More information on changes to parking enforcement.
No comments:
Email ThisBlogThis!Share to TwitterShare to FacebookShare to Pinterest 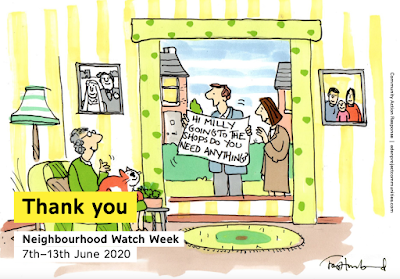 We’ve seen a surge in neighbourliness as people look out for the vulnerable and talk to those next door more than ever before - a silver lining to the cloud COVID-19 has cast over our daily lives. We think now is a good time to say thank you and celebrate those actions our neighbours have taken no matter how small or big. There are many ways to join in:Take part in the Big Virtual Lunch. Organised by Eden Project, on the 6th and 7th June, the Big Virtual Lunch have put together ideas of small things you can do to celebrate community connections with your neighbours such as: making your own bunting and hanging it out for all to see, putting together a lunch for someone or a small food parcel and leave it on a doorstep, joining in with The Big Lunch from your doorstep, hosting a Big Virtual Lunch online from the comfort of your own home, or hosting a Big Virtual Lunch over the phone. 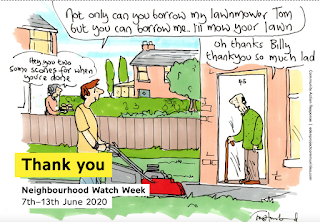 Display a poster in your window or gifting a postcard to a neighbour.Award winning British cartoonist, Tony Husband, has created bespoke cartoons depicting kind neighbourly actions in lockdown. Tony’s cartoons can be downloaded via the ourwatch website for you to display as posters in your window, or postcards to pop through a neighbour’s door. 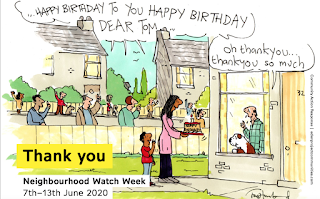 Enter our 'Neighbourliness in Lockdown' competitionWhy not have a go at creating your very own cartoon depicting kind neighbourly acts and enter it in a competition to be judged by Tony himself. You can download blank posters and blank postcards as a template for your cartoons. Full details of the competition can be found here.

Facebook Live Quiz
Put your general knowledge to the test on 12th June at 7pm for a light-hearted Facebook Live Quiz, to be hosted by Neighbourhood Watch Network's CEO, John Hayward-Cripps.  To take part simply visit Ourwatch Facebook page at 7pm on the 12th June, ready with paper and pen. 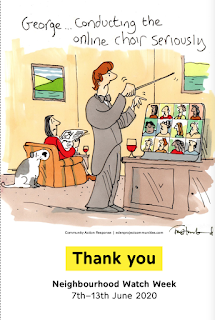