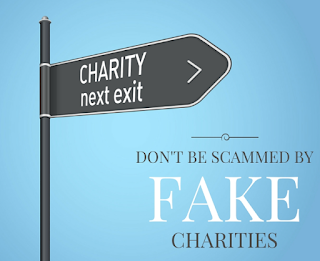 On Sunday 28th October, our Safer Neighbourhood Police were notified of a woman going door to door requesting money for charity. It is believed this woman was not a legitimate charity worker. Was you visited by this person? Did you give any money? Our Safer Neighbourhood Team have requested that NO money should be given to charity callers that knock at your door. If you would like to donate to genuine charities, there are more secure ways to do it - see below.

How to check a charity’s genuine:

Halloween in the Triangle

Tara MacNeill Veitch writes:
Following the success of the last seven years we are once again organising for children to be able to safely celebrate Halloween by trick or treating in the Ashburnham Triangle from 6 to 8pm.
Participation is of course absolutely voluntary. We do hope that your children would like to join in to trick or treat and, whether you have children or not, that you would like to give out sweets. For safety and hygiene please only give out wrapped or packaged sweets.
If you are interested, on Halloween night please place a pumpkin or sign by your front door or window so that the children know at which houses to stop, and so that anyone not interested in participating is not inconvenienced.
1 comment:
Email ThisBlogThis!Share to TwitterShare to FacebookShare to Pinterest
Labels: Local Events

Many of our members may have recently received a letter from Royal Borough of Greenwich concerning the Thames Tideway Tunnel Development over on Norman Road and the proposals for vehicle routes and holding area’s during the initial excavation works. The ATA's Mick Delap has put together a briefing note regarding the project and detailed what the application concerns - click here for Mick's note.

For further information please also have a look at this short video: https://www.youtube.com/watch?v=86PRZg29zJU
No comments:
Email ThisBlogThis!Share to TwitterShare to FacebookShare to Pinterest

Last year Jonathan Chandler, Chairman of the Greenwich Society, and his brother Andrew, who is a professional photographer, spent over four months travelling all the way around the world documenting in photographs and in an on-line blog their experiences.
An exhibition of over 60 of Andrew's finest photographs, together with some extracts and observations by Jonathan is on display at the West Greenwich Library now until Saturday 20th October.
Framed and unframed prints are available to purchase as well as greeting cards of some of the photos.
Admission is FREE

Also at the Library on Tuesday 30 October you can hear Jan Fortune and Adam Craig of Cinnamon read from their latest works of fiction; Jan's A Remedy for all Things and Adam's In Dreams the Minotaur Appears Last. Please come along to support these independent publishers and authors.
West Greenwich Library, 7 for 7.30, Free.

Also, online booking on https://www.ticketsource.co.uk/in-words-ltd is open for Graham Fawcett's next lecture/performance on Anna Akhmatova, with the wonderful Susan Aldred as second reading voice. Tuesday, November 13 (6.45 for 7) at The Treehouse, Greenwich Tavern. More details on www.in-words.co.uk

Finally, the ATA's own local novelist Neil Bailey has a new book out, a ghost story set locally and published just in time for the dark winter evenings and Halloween. The Woman At Twenty-six is available on Amazon and you can check out this and Neil's other novels by clicking this link.

News on the Lenox Project

The Lenox Project, which was founded in 2011, is a charity which intends to build and launch a full-size replica of the Lenox, a state-of-the-art naval ship that was built in 1678 in Deptford and was the first of Charles II’s thirty ships. Find out more about this fascinating project by clicking this link: http://www.buildthelenox.org/home/
No comments:
Email ThisBlogThis!Share to TwitterShare to FacebookShare to Pinterest
Labels: Local Events

One of the charities the Ashburnham Triangle are proud to support this year is Tommy's. Tommy's is the largest charity funding research into the causes of miscarriage, stillbirth and premature birth which one in four women will suffer from. They also provide pregnancy health information to parents-to-be to help them have a healthy pregnancy and baby.

You can read more about what Tommy's believe here.

Wave of Light is an opportunity to join with bereaved parents, families and friends around the globe to commemorate all babies who sadly died too soon. ... To join the global 'Wave of Light', simply light a candle at 7pm on 15 October and leave it burning for at least one hour.

Join us in #BreakingTheSilence this #BLAW2018 in memory of all babies lost during pregnancy or after birth. You are not alone. Learn more about what Tommy's is doing this Baby Loss Awareness Week.

No comments:
Email ThisBlogThis!Share to TwitterShare to FacebookShare to Pinterest
Labels: Charity

A huge Thank You to Henry Lawton, our dedicated PCSO, who attended the Police Meet last Saturday. Despite the pouring rain, the meeting was held inside the Ashburnham Arms with valuable advice being passed onto residents. Below are some of the issues that were raised:
No Entry junction on Devonshire Drive
All types of vehicles continue to ignore the One Way sign and drive in the wrong direction, especially if Greenwich High Road is heavily congested. Police do randomly monitor this junction and fine any vehicle driving through the one way entry but they obviously cannot be present the whole time. CCTV has been suggested but at the moment the cost is an issue which the council cannot meet. This is an ongoing problem which we all need to monitor.

Increase in Burglaries
Unfortunately the police have reported an increase in burglaries within the Greenwich West area. Within the Triangle in the last two weeks opportunist burglars have once again tried to gain entry via open windows - which was a huge problem during the summer months. With Christmas approaching we are expecting a rise in attempted break-ins. The current method of entry is through vulnerable basement sash windows. Burglars have been scouting the area, with one resident noticing suspicious behaviour of two white males only last week, whereby they were specifically looking at each basement window in Devonshire Drive, perhaps to see if any would be easy to break into.  Remember, if you see ANYTHING that looks suspicious, phone 999 - you could be stopping an attempted burglary.

Increase in Antisocial Behaviour
I’ve recently been alerted to two seperate issues of antisocial behaviour which includes all night parties, loud music and drug taking. This type of behaviour is unacceptable and will not be tolerated. The police and council have been informed and they are currently being dealt with.

The squatters in the old Probation building - 39 Greenwich High Road - have recently being causing a disturbance with increased noise and mess. An eviction noticed has been served and bailiffs will be evicting all squatters on Friday 12 October.

Slightly outside the Triangle, but on Monday this week, 8th October, officers attended Old Pearson Street at the junction with Randall Place, SE10, at approximately 08:30hrs to reports of shots being fired.

A short while later a man with a gunshot injury presented himself at a hospital, where he currently remains. His condition is described as non life-threatening or life changing.

This incident took place close to James Wolfe Primary School. At this stage police believe that the incident was unconnected to the school or anyone at the school. Nobody else was injured.

Police are asking for anyone who witnessed or has information regarding the incident to contact telephone number 101 (quote reference: CAD 1483/08OCT18).

To give information anonymously contact Crimestoppers on 0800 555 111 or online at www.crimestoppers-uk.org

Remember, if you see anything suspicious call 999 immediately.

Just a reminder about this Saturday's Police Street Meet which will take place in Ashburnham Retreat (Play Street) or inside the Ashburnham Arms if it rains - which unfortunately may be the case this weekend.  Hope to see you there. 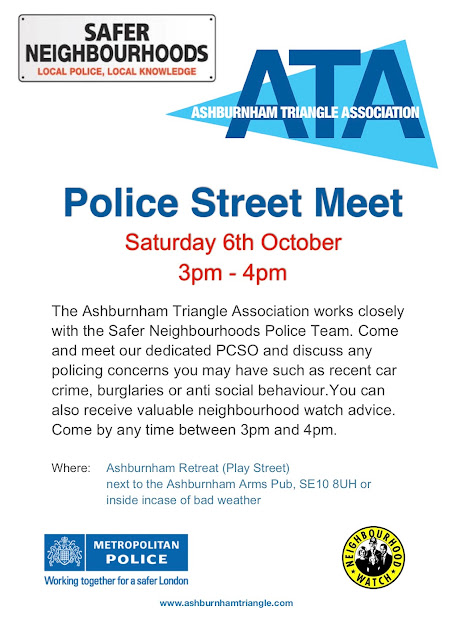 Interested in Triangle local history?  Want to contribute?  The ATA Local History Group is meeting THIS THURSDAY, 4th OCTOBER,  in the Ashburnham Arms, at 8pm.
We want YOU to write your own page(s) as part of the three projects we are proposing:
A.  Who has lived in my house since it was built?  And what have they got up to?
B. Who should get an ATA plaque (David Bowie or Edward Butler?? -  for instance.)
C.  What are the Triangle's MOST HORRIBLE HISTORIES???
We need new stories - so bring what you have already discovered. We all need new skills - and will be discussing how to acquire them (including arranging a visit to the local archives). We need to choose which of the three projects to concentrate on. And we very definitely need new members. So do come - and if you are interested, but can't make it this Thursday, please email Mick Delap (mick@delap.plus.com), saying which of the three projects you would choose.
Mick will also be giving a brief update on his ongoing campaign to create a Creekside Pathway that will access both the regenerated Deptford Creek, and its remarkable 19th Century industrial history.  If you want to be kept informed of progress, please tell Mick.
No comments:
Email ThisBlogThis!Share to TwitterShare to FacebookShare to Pinterest
Labels: History
Newer Posts Older Posts Home
Subscribe to: Posts (Atom)