Are we really living in a violent area? Response to the recent MyLondon news article 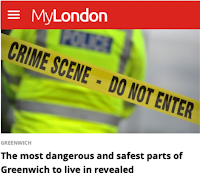 MyLondon, a local on-line news service published an article recently entitled 'The most dangerous and safest parts of Greenwich to live in revealed'. This article has been widely circulated via social media and has also appeared on the ATA facebook page. The article stated that there were 857 reports of theft last year with 645 violent crimes, 276 burglaries and 139 criminal damage offences with Greenwich West Ward apparently the 3rd most crime related area in the borough.

Although these figures are correct [all figures were taken from the Met Police UK website] you must remember that there are only a few categories to choose from when inputting an incident on the computer system i.e. a disagreement over a cab fare will come under the same category as someone being actually physically assaulted but the cases are completely different. It would have been beneficial for the reporter to have found out what some of the ‘violent’ cases actually were and then the article may have been worded differently.

Sergeant Diane Hill, from our Safer Neighbourhood team, contacted the reporter in question regarding this article:

“I am the safer neighbourhood sergeant for Greenwich West and Peninsula – Your article has resulted in some residents contacting me as they are worried they are now living in a very violent area, some of the roads highlighted are in West Greenwich and perceived to be generally safe roads.

I’m guessing you got your stats from Police UK - whilst it provides an overall view of crime in the area – it is not the best. For instance the two ‘violent’ crimes in Westgrove -  were an argument over facebook and a very minor assault over a cab.

Unfortunately your headline gives the impression the crimes are ‘most violent or sexual assaults, enough to worry anyone.

I thought it is important for you to know that the stats are sometime a little misleading and perhaps your headline could have been better worded.

I hope this is some clarification that Greenwich is still a great and safe place to live. With respect to the amount of thefts, you must remember we have thousands of visitors every year to our town centre and where there are tourists, unfortunately there are opportunist thieves.