'Campaigners who want to cut pollution from the proposed Greenwich cruise liner terminal say they have been given a boost by a ruling from the European Commission. The East Greenwich Residents Association objects to the London City Cruise Port, at Enderby Wharf, not having facilities (my note: electricity from the shore) to power ships while they are staying at the terminal. This means ships will need to use their own (my note: usually diesel) generators while moored at the port, which residents on both sides of the Thames say will hugely increase air pollution in the area. 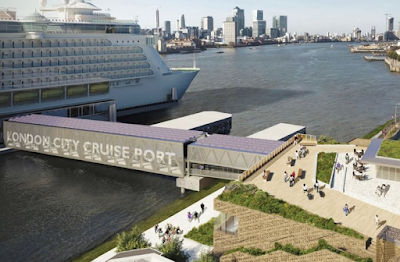 'EGRA has continued to pursue the issue, and last summer presented a petition to the European Parliament objecting to the scheme, saying the environmental assessments had not followed EU law. This went to the European Commission, the 28-member body which implements EU law.
'The commission said that while an overall environmental assessment was not a requirement under EU law, countries that gave permission to schemes that would breach EU air quality rules should take compensating measures to ensure they stay within the law. It said: “If the Member State grants permission to a project that would increase pollution beyond the limit values for ambient air quality, it would logically have to take compensating measures to ensure compliance with the limit values.”

'Even if Britain leaves the European Union, Brexit Secretary David Davis has said that environmental protections enshrined in EU laws would still apply, although Parliament could change them later. EGRA members feel that the Commission’s ruling will help the case for a cruise liner terminal with shoreside power supply, as seen in New York and Amsterdam, and are now hoping to secure a meeting with Environment Secretary Michael Gove.
'Local MP Matt Pennycook is also continuing to campaign for shoreside power at the cruise terminal.'