This is the route for this year’s May Day procession of the the Fowlers Troop and Deptford Jack-in-the-Green, 11.30 am to around 5pm. The Ashburnham Arms is the last pub on the route. 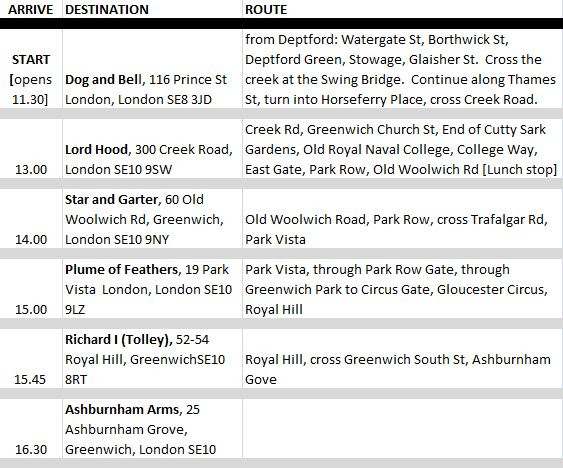 Background of the tradition
The Jack in the Green tradition developed from the 17th Century custom of milkmaids going out on May Day with the utensils of their trade – silver cups, pots, spoons – decorated with garlands and piled into a pyramid which they carried on their heads. By the mid eighteenth century other groups, notably chimney sweeps, were moving in on the milkmaids’ territory as they saw May Day as a good opportunity to collect money.
Over the last 25 years several popular festivals have grown up around the Jack in the Green tradition. These are mostly on the May bank holiday weekend at Bristol, Brentham in North Ealing, Guildford, Hastings, Knutsford, Oxford, Rochester and Whitstable.
The Hastings and Rochester gatherings are now very large festivals. In contrast, the Deptford Jack in the Green, in South East London, is not very widely known although it has been running since the early 1980s.
Contact us: S.J.Crofts(@)gre.ac.uk
Email ThisBlogThis!Share to TwitterShare to FacebookShare to Pinterest
Labels: Local Events