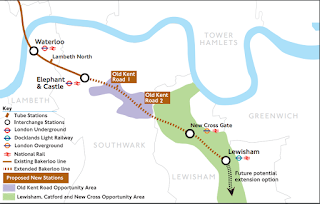 This is not quite a Triangle matter, but probably of interest to many residents: Transport for London (TFL) has begun a 10-week public consultation on the proposed extension of the Bakerloo Line which would extend the line from Elephant & Castle to Lewisham.
The consultation can be found at https://consultations.tfl.gov.uk/tube/bakerloo-extension/  along with information on why the extension is needed, the new capacity it would provide and the area’s that it will open up (notably, according to the London Borough of Lewisham, one area being Deptford Creek and Greenwich Riverside).
There is also a public exhibition this Saturday 19th October between 10;00 and 16:00 at Lewisham Shopping Centre, Central Square, Molesworth Street, London SE13 7EP where you can find out more about the proposals and talk to members of the project team.
Email ThisBlogThis!Share to TwitterShare to FacebookShare to Pinterest
Labels: Local News, Planning