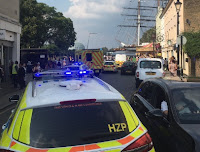 An incident took place in Greenwich Town Centre at around 3:30pm this afternoon, Tuesday 27th August. Officers were called to Norman Road in relation to a stabbing and then to the Cutty Sark in relation to a male holding a knife up to a female's throat. Police attended and the male suspect was tasered and arrested. The full details are still being gathered by the police but at present I can confirm there were two female victims, one of whom is the mother of the suspect. The mother has stated the suspect has mental health issues.

Enquiries continue and a crime scene remains in place. If you have any information regarding this incident please contact either our Safer Neighbourhood Police or dial 101.