A Personal Tribute to Diana Rimel 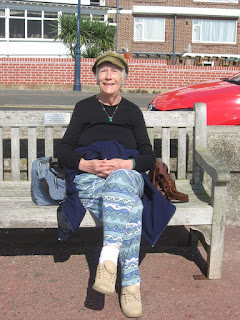 
My mother, Diana Rimel, one of the original members and an early collaborator in the formation of the Ashburnham Triangle Association in the mid 1970s, sadly passed away in the QE Hospital on 12th June 2019 aged 81.
For much of my early life, I lived with my sister Delia in Ashburnham Place from 1961 – 1981; when my family moved from Bermondsey, where my father had worked as a Stevedore in Surrey Docks, to Greenwich.
On moving into this area, my mother helped to set up the ATA along with some other neighbours who lived in Ashburnham Place at this time. The Association soon became a vibrant neighbourhood residents group and mum edited the early editions of the ‘Triangle Telegraph’ as the newsletter was named at that time.
I remember my parents churning out the first editions using a Gestetner, a type of duplicating machine and equivalent of the Photocopier of its day, in the basement of our house. We would fastidiously deliver them by hand to all the neighbouring streets and still have some of the old copies in situ.
My mother was always interested in local issues and started a campaign against HGVs and Lorries cutting though the Triangle’s narrow residential streets. She succeeded in persuading the then GLC and local Council to restrict lorry movements throughout the area. Her achievement in this regard is all the more pertinent today with the Thames Tideway Project and the increase in Lorries we are now seeing using Greenwich South Street and Greenwich High Road; a timely reminder that we still need to keep campaigning together on these quality of life issues.
But throughout her life, mum was mostly renowned and revered for her interest in and knowledge of local history. She was passionate about protecting historic buildings from development and the restoration of original interior and exterior features. She was a known local historian in her own right, ran local history courses at Goldsmiths College, where she had previously worked as an Administrator in the Department of Adult Studies. She gave talks on a variety of subjects such as the Roan School for Girls (Devonshire Drive), Queen Elizabeth’s College Almshouses (Greenwich South Street) and the Merryweather Building (Greenwich High Road) to name but a few of the buildings she really cared about in the Triangle.
Such was her interest in the history of our Neighbourhood and her fondness for the local architecture, Diana set about writing a ‘history of the buildings and community close to the heart of Greenwich, which developed in the triangle formed by Blackheath Road, Greenwich High Road, and Greenwich South Street’ namely the booklet, the Ashburnham Triangle, which was first published in 1994 and updated in 2009.
Many of you will have seen or even read my mother’s booklet which I have now discovered, is on sale on the Amazon website for £27.20! You can still read her work on the ATA website and I believe hard copies are still available for sale at the much cheaper price of £5.
It really is a fascinating read; a descriptive journey through the history of the almshouses, churches/chapels, industrial and municipal buildings, pubs, school buildings and of course the personalities and people which make the Triangle so unique in character as an area in which to live, to work and visit.
Until 2014 before her health deteriorated, my mother continued to organise and assist with local history classes and give lectures on subjects of interest at Mycenae House near to where she lived in Charlton. Her classes always proved popular and were well attended. She invited in guest speakers to cover different subjects, but the history of the Triangle was always her favourite topic from her list of talks.
As a family, we will sorely miss her boundless energy, commitment, dedication, enthusiasm and fondness for this area of Greenwich and all she contributed to it.
She was a member of and actively supported so many amenity groups among which the Ashburnham Triangle was always close to her heart. And it will be a fitting tribute to my mother for the rest of us who care so passionately about our environment and where we live, to carry on her good work in preserving our heritage for future generations to come.