So trains CAN run from here to Charing Cross! 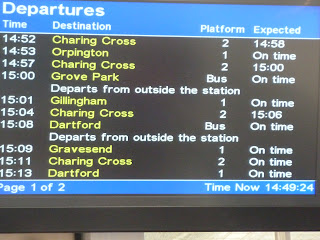 Were you one of the thousands of us who reluctantly believed it would be impossible for trains to run again from Greenwich to Charing Cross after the redevelopment of London Bridge station? Did you swallow Southeastern's claim that this route would be completely ruled out by “disentanglement” of tracks and signalling on the approaches to London Bridge?

If you were, and you travelled up to London over the bank holiday weekend, you would have been surprised to see that all trains passing through Greenwich were terminating at Charing Cross. Cannon Street was closed. Clearly direct services to Waterloo East and Charing Cross are still logistically possible.