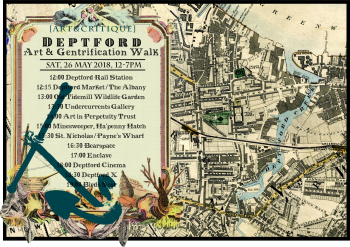 In May [ART&CRITIQUE], a London-based alternative art education network, is visiting Deptford for a day of discussions on art and gentrification.
Join them for a tour of galleries, studios, community spaces and landmarks on a walk along the streets, waterways, green spaces and new developments.
They will meet artists, curators and activists to explore how they are resisting or overcoming the displacement of communities and the shrinking of public and creative spaces.
Meet them at 12noon inside Deptford Rail Station (Deptford High Street, London SE8 3NUAll, booking not required) or join them along the way. Please scroll down for the itinerary and a map of the route. More information and a detailed map are available at https://artandcritique.uk/art-crawl/


I came to London, I was very lucky, at a time when you could still squat in central London and survive here and have enough space to have a studio to work. But now, young artists coming to London – where would they even start? The rents are unbelievable. It’s frightening. (Grayson Perry)