Serious accident in the Triangle on Wednesday 27th 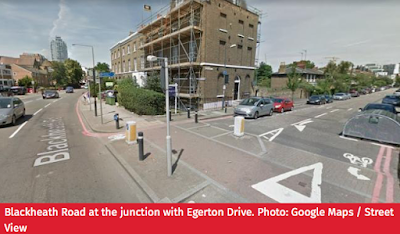 Man hospitalised in critical condition after car crash in Greenwich

A man has been taken to hospital in critical condition after a crash involving a car in Greenwich last night.
Road closures were in place in Blackheath Road, at the junction with Egerton Drive, for more than two hours after police were called at around 7pm.
A Met Police spokesman said:

“Police were called by the London Ambulance Service at 7.05pm on Wednesday, 27 December to reports of a car in collision with a pedestrian on Blackheath Road.
“Officers and London's Air Ambulance attended.
“The male pedestrian – no further details – was taken to an east London hospital where he remains in a critical condition.
“The Met's Roads and Transport Policing Command are investigating.
“Enquiries continue.”
Email ThisBlogThis!Share to TwitterShare to FacebookShare to Pinterest
Labels: Local News