Farewell drinks tonight for Joe at the Ash, 7pm onwards 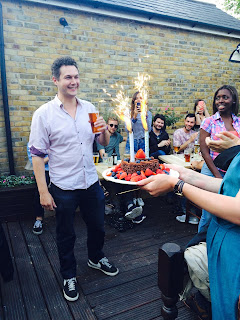 Joe Curran has been lured back to the Queen's Head, Piccadilly, his other pub, where the lights are brighter and the footfall more frequent. Even Joe, capable as he is, can't be expected to run both pubs, so, short of cloning, a man's gotta go where a man's gotta go.

It's our loss, especially as Joe's been a very great help at the street party for two years running now - last year he sourced most of the food. This year his salsa once again spiced up the beefburgers terrifically, his barbecue cooked them, and his electricity powered the cooking. Recipe for the salsa: tomatoes, chillies, red onions, coriander.

His leaving drinks are tonight in the Ash from 7pm onwards. He says we can probably show street party (or possibly other) photos on a wall screen, including a 6-minute video we've got of the street party, made by Greenwich university student Mylie Kefford. So bring your photos and share them, if you like.

See you there! The Thai Pop-up is in action.
Email ThisBlogThis!Share to TwitterShare to FacebookShare to Pinterest