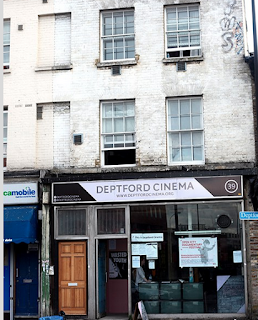 It's been 15 years since Lewisham Borough had a cinema, but now two have started up within easy reach of the Triangle: Deptford Cinema on Deptford Broadway is a five-minute walk away, and the Curzon at Goldsmiths College about a half an hour.

Deptford Cinema is a not-for-profit community society run by volunteer film enthusiasts, showing arthouse films at £5 a ticket in an ex-shop, and aiming to be a hub for all things film, with a gallery, bar, and dark rooms available for anyone to use when the premises are fully fitted out. The 40-seat cinema is showing films now. Setting it up has involved volunteers in a tremendous amount of non-film work, physical and otherwise (on premises, finances, compliance, etc). They are at present in an existential fight over rates and need all the advice they can get from anyone au fait with law or accounting. They have an open EGM on this issue this Sunday 20th March at 4pm at 39 Deptford Broadway, SE8 4PQ, if anyone would like to go and lend a hand or a thought.

Films are esoteric, eg Jurassic Shark, The White Balloon, although A Girl Walks Home Alone At Night (March 25th) was also shown at the Picturehouse. It was excellent.

The Curzon at Goldsmiths is a commercial venture with tickets at £12, in a 101-seat revamped lecture theatre used by the college during the day, showing arthouse, cross-over and mainstream films, eg Hail, Caesar!, Anomalisa, Hitchcock/Truffaut.

We're spoilt for choice now.
Email ThisBlogThis!Share to TwitterShare to FacebookShare to Pinterest