Sadly we have to say goodbye to Sergeant Diane Hill who has been an integral part of the Safer Neighbourhoods Police Team for the last 4 years in West Greenwich. Her most recent initiative helped bring SmartWater to the Triangle. Diane has been promoted to Inspector and is transferring to Swanley in Kent to the First Response Team. We wish her all the best in her new role.  Sergeant Hill will be replaced by Sergeant Ian O’Hara on 2 June.
The rest of the Safer Neighbourhood Police Team remains unchanged:
Police Constable John Moody
Police Constable Jaime Welch - currently on maternity leave but returning late Aug/Sept
PCSO Henry Lawton

Over the last two months burglary figures are down - we have five reported incidents in the Triangle. Motor vehicle crime, unfortunately, continues to rise throughout the borough. There have been numerous reports of thefts from vehicle and stolen vehicles - mostly mopeds and motorbikes - from within the Triangle. Knife crime in the borough is overall down but violent crime is rising.

Outside the Triangle
Two men have been arrested in connection with the "Lebanese Loop" on the TSB ATMs within the Town Centre. Their images were captured on CCTV and will be charged accordingly. Low cost thefts in many of the high street shops are on the increase.

The number of homeless people is rising at an alarming rate across the whole Capital. Within West Greenwich there has been a sudden rise in rough sleeping within bin sheds in Tarves Way. If you see a homeless person it was suggested to contact Street Link. Street Link exists to help end rough sleeping by enabling members of the public to connect people sleeping rough with the local services that can support them.

Within the Triangle
Just when you think you’ve seen it all, along comes a plant thief - yes Plant Thief! Last Friday morning at approx 4.15am two plants were taken from the planters outside the Ashburnham Arms. CCTV captured the thief walking down Ashburnham Place towards Egerton Drive. This individual was looking very closely in all gardens. He was also captured going up to front doors and peering inside so this is just a reminder to make sure you chubb lock your front door and do not just rely on your yale lock.

It's been mentioned before about seeing chalk markings outside properties and that these markings are code for potential burglars. However a new report suggests this is not the case and the markings are purely for potential work. Please see below - blue text is the real meaning. While it would appear there is no burglars' code, there is a colour code to look out for. Typically, different paint colours denote different messages, with red referring to electric wiring, yellow for gas mains and blue for water. 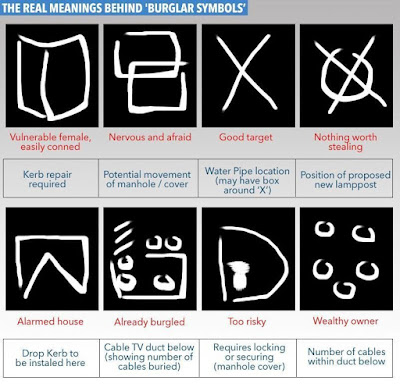