After more than a year, repairs to the boundary wall of the John Penn and Widow Smith alms houses on Greenwich South Street have been completed.
The builders have done a splendid job, although (if we're being really picky) it's a pity they couldn't have salvaged more of the original red bricks and white coping stones. 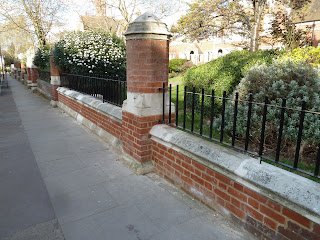 Let's hope the repairs last as long as the original wall, which dates back to the late 19th century when the now Grade II listed alms houses were built.